Does this Money Belt Make me Look Fat?

Why am I up at 5:45 in the morning? It’s not the jet lag, I don’t think. Last night was perfectly fine. Perhaps because the air conditioning was turned off… Dear Lord, I look at the tangle of cords and adaptors surrounding me and plugged in— computer, Flip Video camera, Canon Cybershot, Ipod, IPAD, PSP— and I think… what would I give up? So I’m not the most rustic of travelers. What else would I be doing at 5:45 in the morning? Yes, I could read that Henry Miller book I brought along… or As I Lay Dying… but how nice to arrange my photos bit by bit, instead of never doing it when I come crashing back at home. 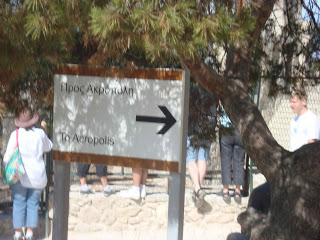 A most edifying day, marred only slightly by children. Our tour guide Marguerita picked us up at the hotel at 8:30, and we proceeded to wend our way to the Acropolis. It can only be described in a word that we don’t allow Benjamin to overuse in his essays but is entirely appropriate in this case: awesome. To look up at the fortified walls and imagine spears and arrows hurtling down; to climb up the path that Pheidippides, the heroic but expiring messenger might have taken (if only they’d known about electrolytes back then!); to marvel at the sheer longevity of it all. 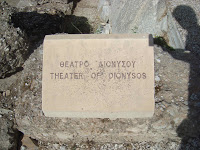 At the base of the Acropolis is the Theater of Dionysus, where, amazingly, they let you sit in. It used to be round but the Romans cut it in half for their games. There was a channel at the bottom where water could exit after they filled up the amphitheater for staged water battles. Take THAT, Cameron Macintosh! 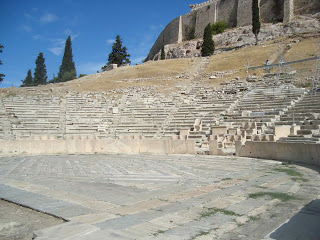 I sit amongst the ruins and imagine my friend and former Greek Theatre teacher, Linda Jenkins, conjuring up Sophocles and Euripides. I imagine my friend Denis O’Hare reciting his adaptation of “An Iliad” here. I think of the dramas I have seen, and how they all have their provenance here… 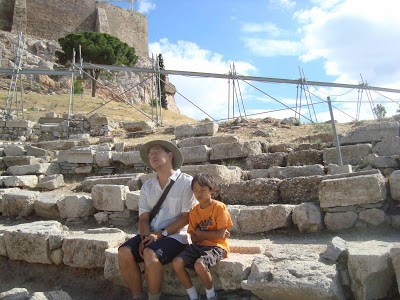 Oh dear. Some things never change, like me falling asleep during Act I…

Up to the walls and the gateway at the top, where visitors would be readied for the site of the sacred courtyard where the Parthenon stands. We walk on the weathered patches of pink and brown marble, still beautiful but sporadic, all of it worn into slipperiness from the millions of sandals, boots and sneakers that have trod onto it as we tourists swarm  like ants over the ruins. 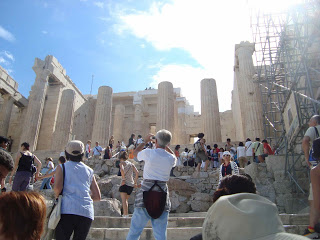 You pass by these enormous columns and then— there it is. The Parthenon. As grand as inspiring as you’d think it’d be. Even with the legions of tour groups battering at its steps, the monument refuses to be daunted, or sullied. After all it’s been through— the conversions to church, and mosque, and artillery depot; the constant defilement from fires, explosives and Catholic zealots— a few thousand tacky T-shirts and crappy baseball caps aren’t going to do it any harm. 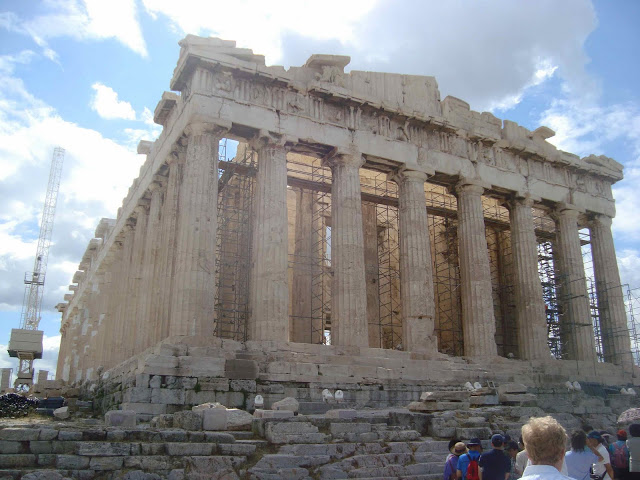 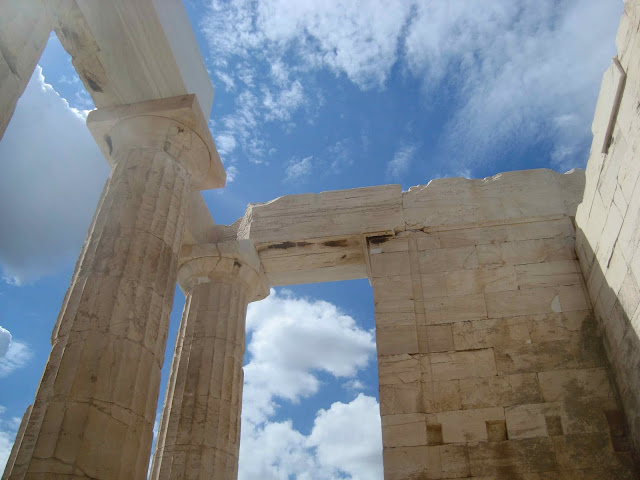 We walk around it, jaws forever lowering into idiotic gapes, and we also take in it’s smaller but still impressive sister the Erechtheion, the temple and tomb where Poseidon & Athena were supposed to have vied for bragging rights over Athens, in whose foundation a snake protector was supposed to have been coiled. We want to linger and soak in the godly glow, but it’s hard to be properly reverential when your son is running into Italian tour groups while swinging an imaginary light saber, and your niece is entirely over the whole event and demanding to be taken home.  Nothing like children to swing you back to the present.

Later, while Doug is resting and Benj is allowed his his own sacred time in front of his holy gaming device (believe me, he had to write an essay about what he saw first; screen time is no “gimme”) I wonder through the streets of the Plaka region, getting happily lost. A rotund Greek man befriends me and accompanies me three blocks to the main square, also to his dark bistro where he invites me in to sit with his three special lady friends. Ah, what’s Greek for “You’re barking up the wrong tree”? I decline (“Ohi torra, efkharisto”) and wend my way back to Xenodoheo Electra and a lovely meal of lamb with lemon sauce and fried potatoes. Everything is gloriously drenched in that miraculous olive oil. Tomorrow—Delphi! 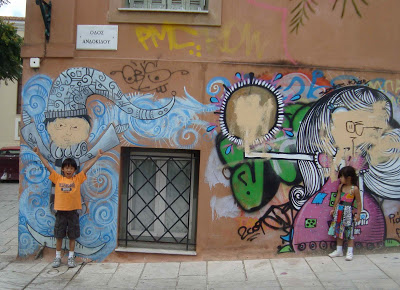 Update: Dear God, it wasn’t 5:45 when I woke up— I read the watch wrong. It was 3:45. Benj woke up too and later I roused Doug to eat breakfast at 7 only to find that I was 2 hours too early. Oops. Can one get late onset jet lag?

2 responses to “Does this Money Belt Make me Look Fat?”