It’s All Greek to Me!

For about two months before my trip, I had been assiduously studying Greek. There’s an excellent audio language learning company called Pimsleur which my sister Sue has been using for years, and they’re great for L.A. folk who are constantly in their cars. It works almost exclusively aurally, which means that I don’t have to read anything, just listen. So whenever I was on the road, I was listening to a lesson. Great for dialect and flow of conversation. They don’t give you any grammar lessons or lists of vocabulary, so if you’re a visual learner maybe Rosetta would be a better fit. I loved Pimsleur.
In Athens, though, whatever Greek I have been able to muster has been largely ceremonial. You know, to tell the natives that “Yes, I respect your culture and am not trying to demand that everyone know my language, as is the custom with arrogant superpower nations such as my own, but I can’t actually have any meaningful kind of conversation with you.” Yes, I could ask “Where is the—“ or “I would like to buy a—“ or “How are you?” but when it came to the actual answer, I had no idea what they were saying. Everyone in Athens spoke Greek, so they would smile indulgently and patiently wait for me to stutter out my rehearsed phrase before continuing on in English. There were those whose eyes lit up at the novelty of seeing a Chinese-looking American say “Good evening, how are you, sir, where is the bathroom please?” in the Hellenic manner. One of the gentlemen at the reception desk, in particular, was quite pleased with my endeavors and took great pains to speak back to me in Greek and fill me in on what he was saying. I’m sorry I don’t have a photo of him, but he did look almost exactly like that character actor in “Bringing up Baby,” Fritz Feld:

Mostly, though, I’ve realized that the learning of the new language is for my own benefit. It’s my way to engage with a new culture, to feel more at ease in a foreign land. I like the challenge of “solving” a  country through language, even though I only begin to scratch the surface. I think it also comes from my inherent need to please, to want people to like me. I guess dysfunction does have its educational purposes…
Our last day in Athens we spent visiting the Temple of Zeus and the new Acropolis Archeological Museum. 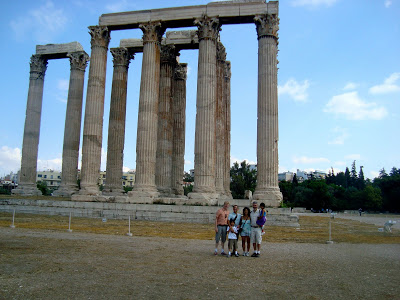 We’re there for a little perspective…
The Temple of Zeus had some of the tallest columns we’d seen thus far. It’s in the middle of a park surrounded by sleeping stray dogs and South Asian immigrants sitting and smacking these gel-like balls that looked like tomatoes, melons and pigs against cardboard on the sidewalk, where they would splatter and then, à la Terminator 2, regenerate themselves into balls again. (Yes, Benjamin had to have one. Only 1 Euro!)
The adults spent a half hour marveling at the ruin and taking pictures from many angles. Benjamin took photos of bugs. He’s found the insects of Greece more fascinating than the giant edifices around him. Macro to micro. The children did what they have been doing the whole trip, trying to pet the dogs and running around chasing each other. 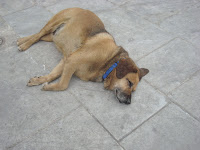 (An interesting note about the stray dogs: In Athens, they round up strays, but they don’t put them in shelters to be adopted or euthanized; instead, the dogs are neutered, given shots, and then released again, where they live on the good will of the human citizenry. More humane or folly? Discuss.)
Full disclosure: this photo actually taken at Delfi. 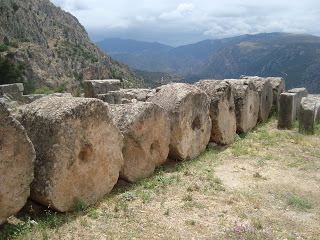 It’s here where I realize, finally, how ingenious those pillars are. I mean, they’re made from giant discs, one stacked on another perfectly, with rods in the center to connect one to another. They’re like Tinker Toys, wrought huge. How did they think of those things, much less get them executed properly? I can’t even get the guest room window in my house to latch properly. 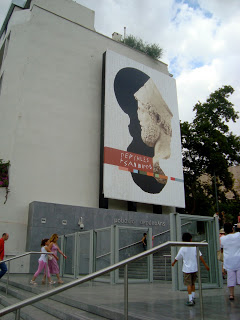 Our last site is at the Museum. It stores all the original art (which hadn’t been pilfered by other countries) from the Parthenon. It’s a pretty amazing museum, for two main reasons. One, the whole top floor is surrounded by window, so you can see the Acropolis across the way. The display of the friezes on that floor mirrors the layout of the Parthenon, with chrome columns in the exact layout of the pillars of the Parthenon.  You can really get a sense of how it would be to walk the entire length of the building. 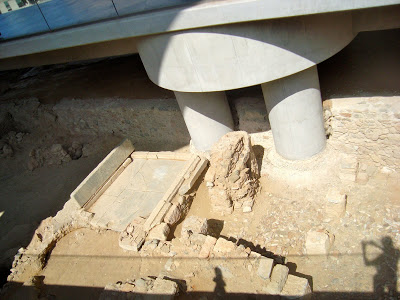 The other great aspect, design-wise, is that they’ve built the museum on top of an archeological dig of a more ancient site, and they’ve made the ground floor and the courtyard of the building out of plexiglass, so you can see straight through to the remains below. It’s like a shark tank, but of ruins. You’re literally walking on history. This museum is a great example of the museum conforming to the artifacts, rather than the artifacts conforming to the museum.
Only drawback is the gift shop, which shows an appalling amount of good taste. Not enough tchochkes! I mean, they could wrack up some serious extra cash if they’d just sell some more Athena floatie pens and snow globe Parthenons. Damn their restraint! The kids are seriously bored through the entire museum (Benj is bitterly disappointed because I had promised him a weapons display and there are none to be found) so we get them some Greek yogurt with honey (piled like a mass of whipped cream on your plate) and skeddadle. We have only two hours left before departing on the ferry, so the families split up. Our last moments of Athens are spent in a relentless hunt for souvenirs and Doug’s sandals, with low blood sugar. Not a good combo. We eat at a very bad taverna surrounded by tourists and barely make it back to the hotel to grab a cab. And so Yassas to Athens. I loved the city. Everyone said to get out of their quickly, but I would have gladly tooled around its streets for a couple days more. 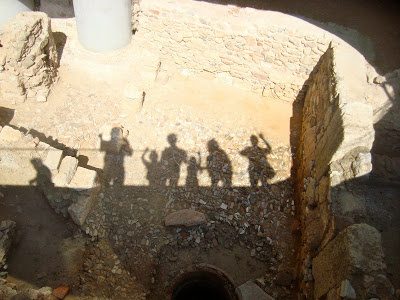 Us waving from the Underworld.
Next up: Mr. Toad’s Wild Ride, or, Our Wacky Adventures Getting to the Islands!