And unlikely duo, those two desserts, but they sum up Las Vegas perfectly.

On Monday, after a night in the sumptuous accommodations of the Venetian Hotel, Choi, her boyfriend Eric and I set off on the Grand Tour of Las Vegas. First stop: Old Las Vegas. The Fremont Street Experience, as the main drag is called, consists of four blocks where a few bandstands are set up at the crosswalks and a light show plays overhead on a giant ceiling suspended over the street. The ceiling captures even the iconic Vegas Vic and Vegas Vicky. I’m sorry to see them hemmed in, without the blue sky above them.

In my book I describe the Downtown Strip as “What the real Strip would look like after she’s gone home at the end of a long night, wiped off her makeup, thrown down her wig, and slipped out of support hose. And she’s sitting around in her underwear, scratching herself in front of the TV.” In the Monday morning light, with all the neon dim, it’s looking more run-down than ever. It’s seedy and worn out and Choi is completely enchanted. Maybe her delight at Downtown Vegas is akin to my hankering for the old Times Square, with the crazies muttering on the corners and the porno shops and mounds of garbage and weird smells. It’s more real, more authentic, though I’d have to say that a majority of tourists are not looking for authenticity when they arrive to either Sin City or the Big Apple. 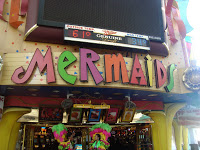 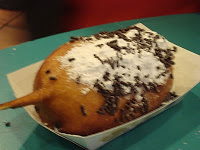 Choi does a happy dance when she gets to eat a deep-fried Twinkie at Mermaids Casino. Despite how revolting this might sound to some, and despite the fact that the deep-fry oil barely bubbles while the Twinkie is cooking, it’s a big hit. Eric thinks it tastes like funnel cake wrapped around a Twinkie and then covered with chocolate sprinkles. I’m intrigued but can’t quite bring myself to try it. My passion for deep fried foods has abated somewhat since my last cholesterol check. I do, however, play the quarter slots while waiting. I feed a dollar, and on the second spin three 7’s line up. I make $10! Good omen? Let’s hope so.

I drive them into the bleaker neighborhoods (we don’t have to go far). It’s funny, pointing out various landmarks from my book, as if the events really happened. “Here’s where Walter meets Chrysto…” “I think Walter would live in that apartment building with Owen,  yes, exactly that one…” Choi won’t be illustrating all these events, but you never know what will come into play, and since we’re here I might as well give her the whole world. 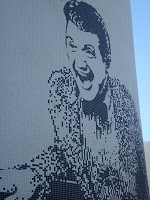 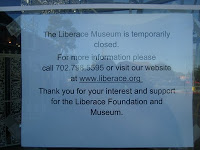 Next stop is the now-defunct Liberace Museum. The parking lot is completely empty; there aren’t many businesses left in the little abandoned strip mall. The museum itself is still there but not open to the public. We pay our respects. I should have brought flowers, or rhinestones. 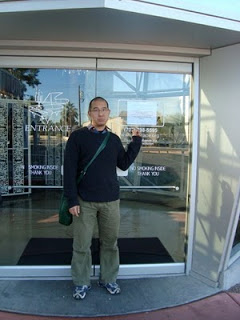 We loop back to the Strip, stopping briefly at the Luxor before driving north back to the Venetian. It’s not very crowded today—hard times, or a Monday? At the Venetian we hit the gondolas, taking a ride and imagining how the canals will look illustrated. We get lunch (Zine Noodles & Dim Sum—yum) and then it’s back to the room to look at Choi’s thumbnail sketches for the next graphic novel interlude. Even in sketchy form I can tell it’s exactly right.

And then we’re done. I work out at the hotel, do some writing, and treat myself to Mario Batali’s restaurant in St. Mark’s Square. End with some of his salted caramel gelato, which is now included in my deathbed meal, (right after that fried Greek cheese with the honey balsamic drizzle). It’s a fittingly sweet and savory ending to a whirlwind trip.