A New Panda in Town 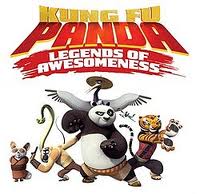 For those of you who think that I spend my days playing Angry Birds and baking cobblers… well, you’re mostly right. But wait! I have proof of legitimate and gainful employment: tomorrow, Monday 19th, Nickelodeon rolls out a sneak preview of a series that will start in November—KUNG FU PANDA: LEGENDS OF AWESOMENESS. 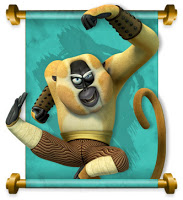 It is, in my biased but usually-jaundiced view, pretty awesome. The animation looks great, the writing is whip-smart, and it’s got the movie’s combination of hi-larity and heart. I play Monkey, one of the Furious Five. (I need to have a little altar dedicated to Jackie Chan, the movie’s Monkey, to thank him properly for being responsible for my livelihood. I got my start in voiceovers sounding like him in “The Jackie Chan Adventures,” a show which gave me a crash course in voice acting, gave me cred and landed me the crackerjack agents I have today.)

Tune in if you can. I think it’s on at 8 PM, but check your local listings. The Nickelodeon website will give you all the info you need, plus some clips. The episode is a good one for me; it’s a nice spotlight to the relationship between Po the Panda and Monkey.

I am not, of course, acting alongside Angelina Jolie, Jack Black, Seth Rogen, David Cross & Jack Black, but if you closed your eyes during a recording session, you might think otherwise. These actors are phenomenal, and not just at sounding like celebrities. Kari Wahlgren. Fred Tatasciore. Amir Talai. Mick Wingert. Max Koch. Their names might not be familiar, but in the voiceover world, they are titans, or on the way to becoming one.  We mostly record as a group, and though I’m occasionally awed and intimidated by their quick-morphing, borderline-schizophrenic verbal shape-shifting, I love hanging out with them. They’re like family, a family in which Scatman Crothers sings duets with Christopher Walken, and Tony Soprano stops by for profanity and cannoli.
(WARNING: THE FOLLOWING CLIP IS NSFW- BUT PRETTY DAMNED FUNNY):

Of course, I could be setting myself up for a big, hubristical ostrich egg on my face… recasting voices is notoriously easy in the animation world. I was on a series where the main celebrity villain was recast during a season and recorded with different actors, but they ended up reverting back to the celebrity… and he never knew he’d been dumped and then rehired. You should never count your voices until they’ve aired. But, unless you tune in Monday and hear Daniel Dae-Kim’s voice coming out of Monkey’s body, you’ll get to hear me at work.  It’s a total joy.

8 responses to “A New Panda in Town”