First of all, Doug is not carrying around a little joey in his gut. That’s just silly. You look just fine, darling.  Just fine. Now grab another piece of pumpkin pecan pie and come to bed. Don’t forget the whipped cream.

The day began with military precision. Counters cleared, dishes put away, utensils at the ready. Stel and I hastened everyone away from the kitchen and made them eat breakfast out. Turkey out of the brine, and… into the oven. The race begins! Dinner rolls shaped and proofed. Mis en place arranged. And then, an eerie calm descended. With so many of the dishes already prepared and ready for final heating, all was quiet on the western front.

We had some deviled eggs to prep, some green beans to trim, but no major cooking until the turkey came out of the oven. It was odd, like we were in the trenches, waiting for the battle to begin.

“The final breath before the plunge…”

Three hours later, the thermometer reads 165. Show time. Even then, there’s no major crazy running around like a turkey with its head… you know. The gravy is easy to make since the base is already done. Stel sautées the green beans. Casserole dishes get shuttled in and out of the oven. I carve the turkey. Cranberry sauce gets unmolded. The table is beautiful. We made it. 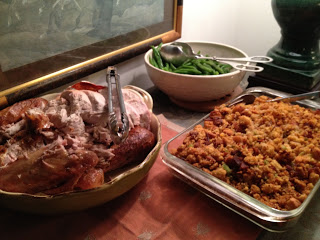 And yet… my plate is piled high with fabulous food but as I raise a fork I can’t help but feel it’s all a little anticlimactic. A  week of work, culminating in a plate of food. Really? What meal could possibly not disappoint with such expectation? It is, after all, just food. 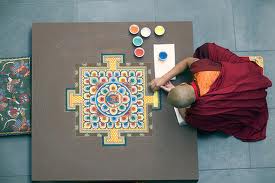 Ah, I have to remind myself. It’s not just about the food. It’s about the process, and the intent. It’s like those sand mandalas created by Buddhist monks: painstaking and temporary, except the mandala is created out of sweet potatoes and cranberry sauce. I also realize I haven’t eaten properly the whole day and put maybe a little too much Gran Marnier in my mulled cider. I take a bite. Oh wait, I think, I was wrong.

It is all about the food.
The meal rises and falls with the turkey, and our little Heritage Tom did not disappoint. Moist, flavorful, and lots of dark meat for me. Sides were delish. The stars? The mashed potato casserole, and, surprise surprise, the peach-berry pie, which was largely improvised.
I’m thankful to  Martha Stewart, for the turkey advice. And thankful to Dorie Greenspan for her desserts. Most of all, I’m thankful for the friends and family who have traveled far to sit at our table and share a meal and let me create obscene amounts of food for them. For Stel for being as obsessed as I am. And my own family, who know to stay out of the way and let baba cook. It’s been a pleasure.
Mission accomplished. Now I just need to sleep for about three days.

PS. See what Doug thought of the food at http://www.douglaswood.net.