Yes, Benjamin, There is Possibly Not a Santa Claus 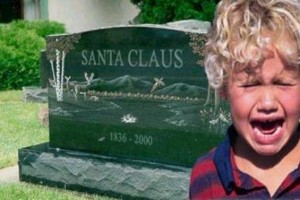 The gig is up. Or could be. It’s hard to say. After dinner, Doug calls out to me from where he is putting Benjamin to bed. I trudge upstairs begrudgingly (Why can’t he put the boy to bed by himself? Doesn’t he know I’m doing the dishes/checking Facebook/playing a round of Angry Birds: Seasons?) until I see Doug’s sad little pout at the top of the stairs. “Benjamin would like to ask us a question,” he says to me, in a loud mock-conversational tone that parents use on each other when they’re trying to impart hidden information.

I enter the bedroom. Benjamin is under the covers, but rolling around. He’s not nearly sleepy.

Ahh, this conversation. “Why do you say that?” I ask, in that loud mock-conversational tone parents use on their children when they’re trying to buy time.

“Because how can Santa Claus go to everyone? It doesn’t make sense. So you guys are Santa Claus, right?”

I look at Doug. It’s about time. Ten years old. About a third of the kids in his class, I figure, already know the awful truth, and most of the rest are on the verge. To be honest, I’d be happy if the gig were up; it would save a lot of time on subterfuge. I  hedge, asking him the question we’ve used several times before: “Do you really want to know?”

“Just tell me!” He’s already over the cliff, there’s no turning back.

We look at each other and then at Ben. We nod. “I knew it!” he yells triumphantly. But, almost immediately, I see a slight widening of his eyes, an inward stare as he processes his new-found knowledge. “So you guys give me the presents and stuff?”

I shrug and nod sadly.

Repercussions begin seeping into his brain, supplanting the thrill of discovery. “But… it can’t be true.”

Ooooo. Ouch. I want to point out that we didn’t actually LIE, that if he read the transcripts of our conversations re: Santa he would see that we have sidestepped every direct Santa identity question with an adroitness that is positively Clinton-esque. Comebacks like, “Why do you think that?” and “How could I be Santa?” and “Is that a Pokemon under the table?” have always kept us technically lie-free, but such parsing of intent is not going to wash, here.

Doug fields the question as I die a little inside. “We don’t lie. But we play games. Parents play this game with their kids on Christmas.”

I recover. “To make it more magical, more special.”

But something has short-circuited in poor Ben’s brain. He’s sitting with Leonardo DiCaprio in “Inception” and the café is blowing up around him. And then, another dread revelation prompts him to blurt out another question: “Are you the TOOTH FAIRY?”

Oh dear. Benj has a long and intimate relationship with the Tooth Fairy. Really, she’s more alive to him that Santa. They’ve exchanged pithy correspondence (written by Doug on fancy artisan paper). He knows her name, for God’s sake: Edith. When Ben lost a canine at his grandma’s in Illinois, he prepped doll furniture for Edith so she could rest after the flight from California. 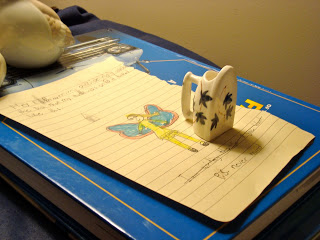 I begin to see the downside of our creative and extensive lying.

I give him a frown smile and say, “What do you think?”

But it’s too much. He’s gone too far. A panoply of iconic holiday characters fall, like dominos, in front of his eyes. And he can’t lose Edith.”No, I know you’re not Santa Claus.”

“Okay… if you want to believe in him, that’s great,” Doug says.

He’s backtracking furiously. “Yes, I believe in him because the reindeer, they’re real, Donner and Blitzen and Dasher… and his handwriting, I know your handwriting and Daddy’s and he has different handwriting.”

We’ve had our friend Sherrie wrap the presents (with different, new paper), arrange them under the tree and write the notes all these years. Damn my attention to detail.

We nod, as if he’s made a reasonable request. “Okay,” we say, and edge out the door, leaving him teetering on the brink of discovery, and maturity. He’s pulled back because, more than losing this iconic character (and said character’s gifties), I think he realizes that giving up Santa (and Edith) will bring him that much closer to growing up, a place where, at this point, he firmly does not wish to venture into. He already knows, instinctively, that entering into adult reality means losing—I don’t think he’d call in innocence— the possibilities of childhood.

Edith has saved Santa for another year. Maybe.

Ben has since dropped the subject. He talks about Santa and it’s not ironic, or sly. It’s as if we never had the conversation. He’s willing to suspend his disbelief for at least another Christmas. Which is fine with us. 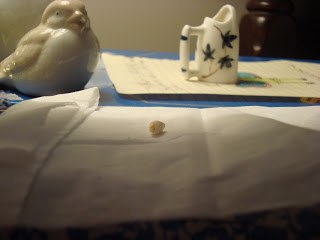 4 responses to “Yes, Benjamin, There is Possibly Not a Santa Claus”