I wrote my blog, but the dog ate it.

Yes,  yes, I know. MIA. Big time. It was, you know… life. Intruding. Extruding. Imploding. Not one thing, but an aggregate of STUFF conspired to knock me off my regular posting. Mea Culpa.

I know there’s really no excuse, but that won’t stop me from listing them:

TOP 10 REASONS WHY I WASN’T POSTING

10. An interminable spring break, with trips hither and yon (New York, Ventura County), equipped with naught but an iPad, which makes for trickier posting. Saw a lot of old friends, my sister, a great play and a few dolphins, but got very little writing done. I need routine, damn it!

9. A miserable tax season, with ever-mounting piles of paper threatening to overwhelm me, à la Brazil:

8. Easter *
*(Not an excuse—I prepared nothing for Easter this year. We were in a beach house in Ventura and the most I did was buy a Trader Joe’s Easter bunny and Trader Joe’s jelly beans [both clearly marked with “Trader Joe’s”] and leave them next to Ben’s bed. I thought we were DONE with the Easter Bunny! When Santa Claus topples, doesn’t the Bunny naturally follow? Apparently not: when Ben woke up, he looked at the paltry booty and said “Do you think the Easter Bunny left something at our house, too?” Really, Ben? Really?

8. Work! Last week I had 4 voiceover sessions in 5 days. Plus a couple of on-camera auditions. A rare but welcome concentration of gigs. I did two highly-anticipated computer games (a violent one and a fantasy one; can’t say more— non-disclosure forms abound) plus a Kung Fu Panda TV episode. Did you see the one where I play Monkey AND his brother?

7. Going back home for my parents’ birthdays and my father’s back surgery.

6. Recovering from time spent back at home.

5. Game of Thrones season 2!
4. My Apple Overlords tell me I must move to the Cloud, so I do so. It’s just a few simple clicks, right?
3. Install OSX Lion to get on iCloud, buy new Microsoft Word  & Filemaker Pro to replace  ones that no longer work with new operating system, back up all my files, download and install Sugarsync* to sync documents over my devices, get a new iPhoto in order to use Photostream, figure out why everything is running so damned slow… cry just a little.
*Sugarsync is like dropbox, but you don’t have to put your stuff in a special folder to share them over your computers. It’s pretty cool. If you try it, drop my name—I can get more storage!
2. I’ve just started a course on Buddhist precepts, in which you must write two essays a week, baring your very soul (more on that next time). 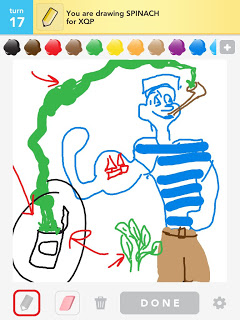 *I had a whole junkie cycle with that game—infatuation, obsession, and eventually, rehab. Please don’t ask me to play. Really.
**Still playing W.E.L.D.E.R, which is like Text twist, Scramble, Scrabble, and Tetris combined.
*** Hey, give me some credit. I haven’t downloaded Angry Birds in Space!*
*yet.

Onward and upward. Welcome back!