Damn, June has just sped on by.

It’s been a deluge of activities from most sectors of my life: as a father (the endless end-of-the-school-year events); as a brother (my sister’s wedding, which was so beautiful and magical we felt we were in a Nora Ephron rom-com); as an actor (hosted a party for the Kung Fu Panda folk–hey, we won four daytime Emmys!); as an Alien aficionado (I liked “Prometheus”—shut up!); as a writer—

Uh, in that sector, not so much.

Because of my scriverly neglect, I thought I’d offer you a little smorgasbord of academic fun, something for the intelligentsia in all of us. Don’t worry— no “Prairie Home Companion,” I promise.

First off, from The Onion, an apocalyptic warning from the poets of America. The printed version may actually be funnier than the video, but you can get both here (I tried to embed the video but it’s being cranky—sorry). I cringe and laugh at the same time while watching this. 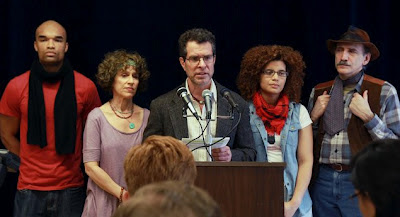 Next up, something for you “Fresh Air”fans, a side of Terry Gross you may not have seen before:

Have you tried “Wordle” yet? It’s a website where you can upload the entire text of whatever writing you’re working on, and it’ll generate word art based on the words you most frequently use. The program disregards the small words, so you don’t end up with an image full of prepositions and conjunctions. It only takes a second to work, and you can spend HOURS adjusting the colors, the format, the orientation of the words… you wonder where my time goes. I put in my manuscript of “This is How It Begins” and here’s what came back: 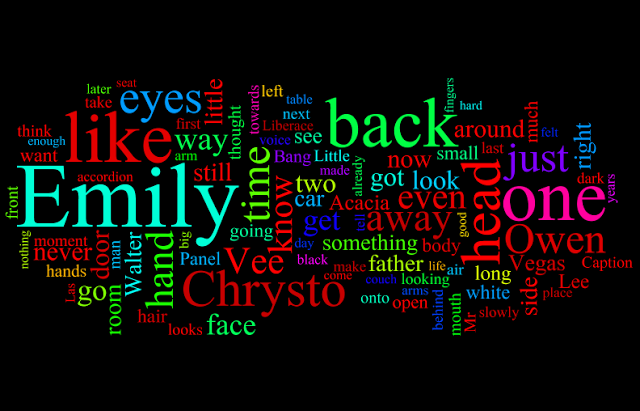 Besides looking super cool (especially printed up on photo paper) I like how it makes you view your writing by condensing all the 84,000 words you’ve written into just the top 100 (or 150, or whatever you designate). For instance, I knew Emily would figure largely in the design, but I thought Liberace would be a bit more prominent, given how much he figures in the story. I love how the accordion is nestled right above Emily’s name.

For those of us forging ahead with their writing projects, my sister Susan found a great site which offers up a marvelous list of writing tips from famous authors: http://www.openculture.com/2012/01/writing_rules.html 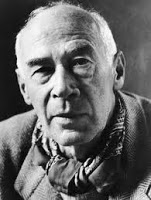 3. Don’t be nervous. Work calmly, joyously, recklessly on whatever is in hand.
6. Cement a little every day, rather than add new fertilizers.
10. Forget the books you want to write. Think only of the book you are writing.

9. Don’t sit down in the middle of the woods. If you’re lost in the plot or blocked, retrace your steps to where you went wrong. Then take the other road. And/or change the person. Change the tense. Change the opening page.

10. Prayer might work. Or reading ­something else. Or a constant visual­isation of the holy grail that is the finished, published version of your resplendent book. 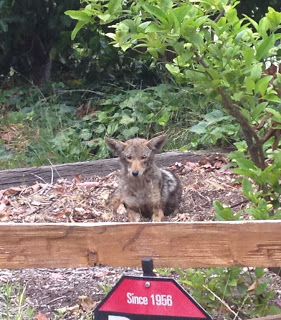 Walking the dog yesterday morning, I came upon a young coyote nestled in the leafy ground of a front yard one house away from me. The front yard! He was supremely unconcerned that a man and his slavering dog were coming towards him; indeed, he didn’t even get up from the little bed he had made for himself. I thought at first that he must be hurt, he was letting us come so close, but then, when Rowdy made a sudden lunge towards him, the coyote got up, walked two steps further, scratched, and then settled himself down again. He was six feet from the road! I imagine he knew I have not been working on my coyote book for a few weeks now, and was telling me, “If you’re not going to make an effort, I certainly won’t!”