The City Mouse Chills Out 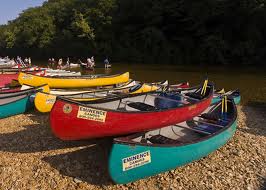 You can hardly blame me if I had reservations. A canoe trip. In the Ozarks. 107 degree temperatures. With in-laws. Chance of storm showers. Sound like fun to you?

I am, by nature, not to be found in Nature. I am much more likely to be found in Coffee House. Preferably one with wifi.  I am a creature of concrete and meters, with very occasional forays to a temperate beach. Doug’s whole family knows this about me, and yet, with perverse delight, insist I come with them. So, we made the trek to Southern Illinois. Two days in Godfrey, and two days camping three hours south in Missouri. “Can’t wait to see you camping,” his mother told me with uncharacteristic glee, as she welcomed me to her home. You and me both.

Illinois was in the midst of an unprecedented heat wave. Even Benjamin lasted only minutes in the sun. I sought solace in a nice iced frappuccino, and this was when I realized, to my infinite horror, that Godfrey Illinois differs from Los Angeles in one crucial aspect: it is bereft of coffee establishments. I entered “coffeehouse” into my Yelp iphone app and it diverted me to St. Louis. I pled with Siri: “Where can I get a cup of coffee?” and she pretty much shrugged. I may have also heard a faint metallic snicker.

The City Mouse is dumfounded. Truly, it is beyond urban comprehension. I could throw a stone in any direction from my house and it would land in a grande soy double-shot mocha. Surely, people drink coffee in Southern Illinois. Made to order, overpriced iced coffee beverages are a basic human need, right after food, clothing and internet access. How could there NOT  be a coffee shop? Where do all the wannabe screenwriters sit and check out their Twitter accounts? And what about Starbucks and their evil corporate pursuit of world domination? Isn’t Godfrey, Illinois deserving of evil corporate domination? Don’t folks here know what they’re missing? Do we need to organize a “Coffee for Godfrey” benefit concert? By all that is good and holy, get me a frappuccino!!! (1 pump, no whip).

(The caffeine crisis was averted by a trip to Schnucks, which sold bottled Starbucks. I was later told that there is a perfectly nice Panera not too far away. I took this, much like the white ovoid robot in “Wall-E” views the green seedling, as a sign that civilization is possible.)

I was duly caffeinated when we made our trip to the southeast Ozarks. THE SOUTHEAST OZARKS. Somewhere, in the back of my lizard brain, I heard the ominous buzz of giant mosquitos and twanging banjoes. My inner Ned Beatty was frightened. Luckily, I had my ten-year-old son with me, and I had to show him, by example, not to be frightened by new experiences and that challenges were to be embraced. It was not unlike me encouraging him to handle the worms in my compost bin without him knowing that I, in actuality, have a mortal fear of earthworms (childhood annelid trauma, best left for another post). 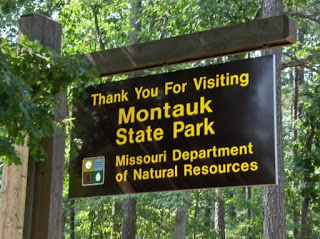 The day was sunny, but not lethal. Montauk State Park is not the desolate wilderness I was expecting, but more in line with the Pocono Mountain camp I used to attend every summer in my remote adolescence. Ah, Spruce Lake Christian retreat, if you could see me now! I have fond memories of that camp; when we weren’t being converted or testifying, we had a full slate of outdoor activities and cookouts. I can remember all those Christian camp songs to this day, and will unleash them, full-throated, upon Doug if he provokes me. I also recall with fondness how I would get asthma attacks at 2 am whilst sleeping in the communal tent, and how the next morning the other boys would exclaim “Last night did you hear that woman screaming?”

This time, there is no tent in my future. While Doug’s siblings and their families were pitching tents in the campground and his mother was staying at The Lodge, Doug had reserved us a cabin. This proved to be a good move; as we arrived at the campgrounds the promised rainstorm began. We left his family to hurriedly erect their tents and drove to our “cabin.” This “cabin” was more like a rental condo in the woods, four units to a building. We had a full kitchen, living room with a Pullman bed for Benjamin, bathroom and a separate bedroom. Air conditioning. Balcony for grilling.

The City Mouse is overjoyed.

Dinner was cooked and eaten out of the rain in our “cabin,” and though there were twelve packed into the space it didn’t feel too crowded, not when there was another room to retreat to. Our phones got no reception at all and there was no wifi, but I was perfectly happy with this conception of Roughing It. I got a LOT of reading done. We slept, slightly warm and unassailed by bugs, Facebook posts or the New York Times daily crossword.

And the day of the float trip? Miraculously, the rain had cooled everything down and it was a perfect 85 degrees and SUNNY. We were driven to the dock site in a repurposed school bus driven by a man with questionable teeth and a growth in the back of his neck the size and shape of a Mandarin orange. Doug, Benj and I were in one canoe, Doug steering in the back and me up front finally using the muscles God and P90X has granted me. We set off.

It was a revelation. I hadn’t realized how much of a Californian I’ve become until  this float trip. The ocean is in constant, roiling motion; the sound and movement of the water is a reminder of the ever-changing nature of the world, the steady pulse of destruction and creation. The journey down the Current River offered a meditation of a completely different sort. For long stretches it was completely still and serene. My paddle dipped quietly in the current. Each small movement—the sudden eddy around a stone, the fish flicking on the surface, the rustle of a river otter along the bank—commanded my attention and kept me in the present. I was in Nature, and I was part of Nature, one with the muskrats, snakes and crawdads. Sure, there were lots of others on the river: families on kayaks, raucous high school kids, old-time fishermen, even a pod of giant women lounging with beers on inflatable rafts, but a dozen strokes later the canoe sailed around the bend into silence once more. Peace. 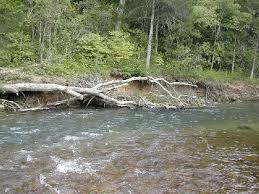 And the water! So crystalline. We swam in a section where spring waters merged into the river, and jumping in was like drinking a tall glass of cold water on a hot summer day, but WITH YOUR ENTIRE BODY. It was also the oddest phenomena to come up to the surface and realize that it tasted, not like salt, not like chlorine, but like, well, WATER.

The best part? Watching Benjamin soak it all in. He saw other kids jump off a twelve-foot cliff into the river and without any hesitation followed them in, then made instant friends on a rope tied to a tree swinging out into the water. This, I thought, is what a summer vacation looks like.

The City Mouse is converted. 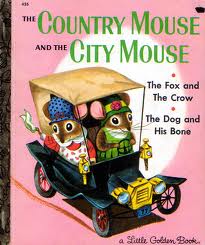 * This post written at the Starbucks at Gower & Sunset, southwest corner *

10 responses to “The City Mouse Chills Out”