So I’m Getting a New Kitchen. Boo Hoo for Me.

There is a constant pounding, pounding in my head, inescapable as guilt in an Edgar Allen Poe story. All day, this endless cacophany–I  feel like John Hurt as Caligula in “I, Claudius.” But it’s not impending madness which comes my way, oh no, it’s something much more momentous, and, in the short term, traumatic:

I made this mistake, a couple of years ago, of dismissing an idea of Doug’s about getting a second dishwasher. Aparently, his Royal Highness had a problem with five straight hours of kitchen duty in exchange for one of my multi-course cooking events (this does not even include Thanksgiving, where cleanup sometimes lasts well into the sixth day of Christmas). I dismissed his request as ludicrous. “What’s wrong with the dishcloth and Brillo pad I got you last year?” I demanded.

I thought he was being way too extravagent, but little did I know how far he could go. To exact his revenge he instead began lobbying for an entire new KITCHEN. Somehow, this idea passed through both houses of Congress and was signed into law before I was even aware of it happening. Theoretical! I thought we were talking theoretical!

So, here’s the before: 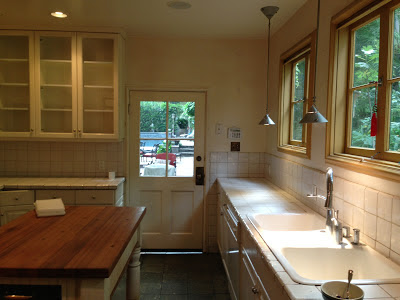 And here, after a few days of banging and destruction:

Don’t get me wrong, it’s gonna be gorgeous. We have a designer who does amazing, beautiful work with wood, and our counters and cabinets will be a thing of beauty. The redesign will also eliminate the physical contortions we undergo every time there’s more than two people prepping in the space.

It’s just that it’s gonna be six to eight weeks of construction noise, and me without a kitchen. Me. I’m the kind of person who can’t feel comfortable in a place until I’ve found the nearest grocery store and mapped out the floorplan. I’m the one filling mini-eclairs for my son’s birthday party when I could have just BOUGHT THEM. This is going to be a challenge.

I’ve created a  makeshift kitchen in the playroom, storing dishware and bowls amid the boxes of board games and bins of Legos. I’ve raided Costco for a toaster oven and a hot plate, and my friend Denis wisely gifted us an electric kettle. Here’s our petite cuisine, in all its glory: 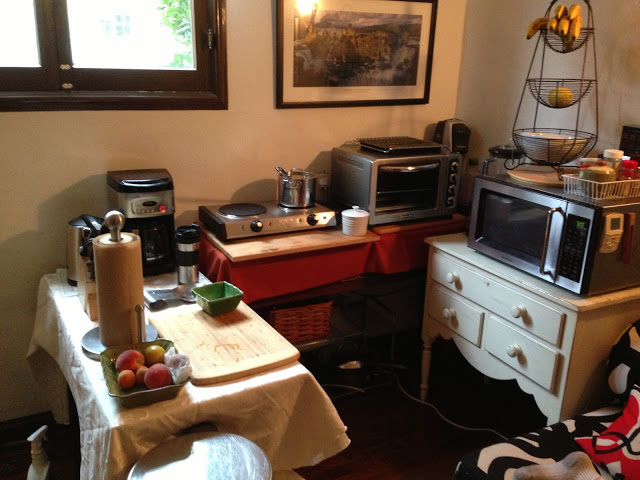 It’s kind of like a cross between a camping site and a kitchen in a typical New York City apartment. Just the barest of necessities: microwave, hot plate, toaster oven, and an electric kettle. And a blender. And a coffee maker. And a SodaStream bubbler, Well, we can’t live like savages, can we?

There is one problem with this setup, which I discovered when trying to cook my first dinner: you can’t use more than one appliance at a time, or it blows the fuse. Surprise, surprise. That’s why it took me an hour to make green beans, warm pita and microwave bowls of soup. (“This hot plate is taking so long to heat up the water…oh…”) So much for multi-tasking.

And then there’s the matter of the washup. We’re using the shower in the small downstairs bathroom. After every meal I kneel like a Carmelite nun on the threshold of the shower and scrub dishes in the bucket, then Waterpik the hell out of them. The worst part is the liquid mess—what to do with the remaining lentil soup or watery oatmeal? They can’t be disposed of  down the sink or in the shower drain, so for now… into the loo it goes. It’s all so very, very appetizing.

I know, I know, there’s such a thing as restaurants and frozen meals. But cooking gives me great pleasure, invigorates and centers me. Can this situation be made better? Campers, college students and NYC apartment dwellers: suggestions? Any favorite meals made in a toaster oven? Tips on not setting off the smoke alarm with your unvented hot plate? Recipes for cooking veggies in the microwave?
Or perhaps it’s time to get on to that raw food trend…only then I’d have to plug in a dehydrator. 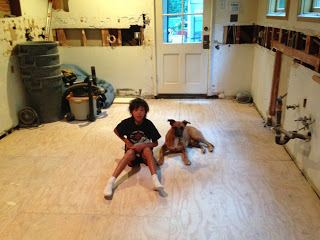 3 responses to “So I’m Getting a New Kitchen. Boo Hoo for Me.”