Disney movies. And now Zac Efron. Since beginning this 90-Day Novel Challenge I’ve been checking in with my cohort and pal Holly Myer (who is going to be drawing 90 illustrations in 90 days) and our conversation has been turning ever to the sunny side, much to my dismay. I chalk it up to Holly’s pernicious and persistent optimism. I thought I was immune but perhaps it has taken root even in this parched and barren land. The girl will not go dark! I swear, if my book ends with a basketball game or a musical number set in the halls of a high school, my attorneys will be contacting her.

We might blame Holly’s positive attitude on her upbringing by a Methodist Pastor mother, but Doug’s Dad was a Methodist minister and we know how that turned out: 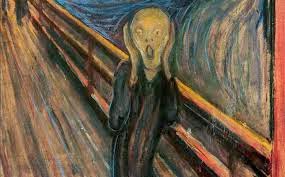 Here’s our chat-conversation from last week. Yes, I realize it’s late, but, you know, I’ve been WRITING (and yes, I have been making my quota):

Holly Meyer: Hello! it’s been a while!

James Sie Okay, before we get started, I have something serious to discuss with you.

JS: I don’t want you to be upset, but… I’m not sure I’m feeling it anymore.

HM: Zac? Or the project?

JS: I mean, he’s gone from being this friendly, approachable guy to something more… fratboy-ish. That perpetual pursed grimace on his face, like he’s vaguely pissed off—

JS: —that macho posturing— wait… Are you saying that he’s actually so good as a performer that…that he’s inhabiting the IMAGE of a pissed-off frat boy, but is not actually becoming one? 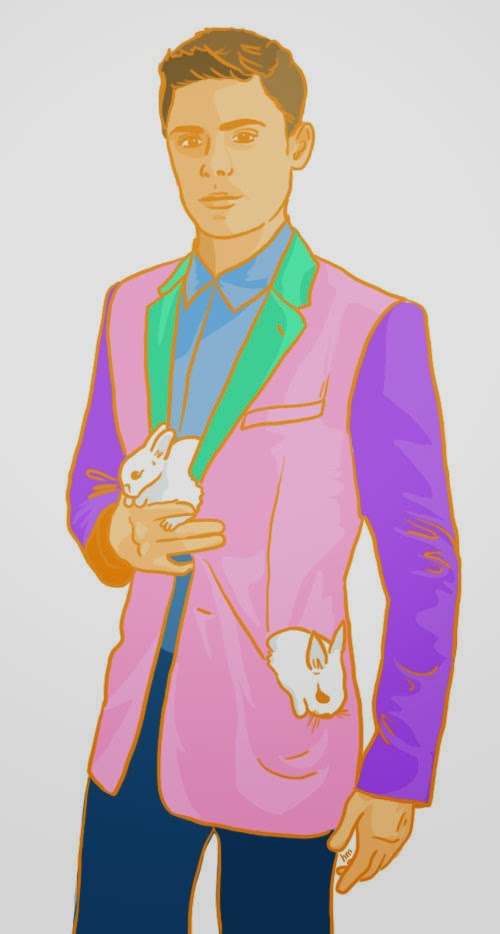 JS: Ohhhh.  I’m back in. I’m guessing, judging by your pastel Easter Zac, that you have not lost the faith.

JS: Let’s talk projects. It’s almost been a month, can you believe it? A MONTH.

HM: I knowwwww! I’m a little behind.

HM: I had a few busy weekends of family Easter, then wedding mania. Excuses, I know. I haven’t lost motivation at all, just time. How’s your progress?

JS: Oy. I’m in a terrible terrible mood today, because tomorrow I have to start ACTUALLY WRITING.

HM: Ooooh. The planning stage is over?

JS: Yes. It’s been great just doodling, as it were, without the pressure of writing. And I hadn’t put NEAR enough time into it, but I did show up for at least fifteen minutes every day but one.

JS: I’m the kind of person who, in high school and college, would just compose on the typewriter. No 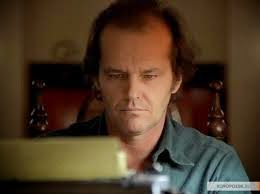 drafts. Everything had to be perfect. This was the days of no cutting and pasting, you know. Or do you know? You probably don’t know. There was only white out, if you had a typo. No do-overs. Or correction tape. WAAAAAAAY before your time.

HM: I used to use a typewriter in my mom’s office!

HM: I WAS 12! It taught me a lot about patience and attention to detail.

JS: So the idea of allowing oneself to write badly, just to get it all down, is going to be extremely uncomfortable for me. I don’t know what’s going to happen. It IS a lot of pages!

HM: That’s the idea of a big challenge though!

JS: Sigh… I guess… If I get stuck I’m just going to keep writing “All work and no play make Jack a dull boy.”

JS: Have you had any epiphanies while drawing, in connection with your book?

HM: I’ve realized I admire strong female characters. Most of the reference photos I’ve banked are of ladies with opinions.

JS: On your tumblr I recognize Lena Dunham, but who’s the first woman?

HM: I just posted a Kristen Wiig, in a scene from Bridesmaids. She’s a character who feels like she’s losing her connection with an old friend, and having trouble finding her way on her own. 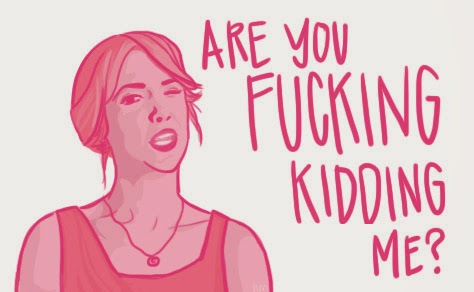 It’s interesting, especially, as my friends are starting to get married! I feel like I’m always defending my life as a single lady. Stuff like that. GIFs I’ve been using all year suddenly have more meaning to me.

JS: Does 2 more months of this stretch out like a barren wasteland, or a yellow  brick road?

HM: Yellow brick road, for sure. (Dorothy’s another good character!) What about you? Especially now that you’re starting to write 1000 words a day?!

JS: Tomorrow. I’m filled with dread. Because I’m going to have 60 days worth of dreck to despise.
How’s that for optimism!

JS: The author talks a lot about self-destruction, about not letting doubt impede you. I do have to  say this: tonight, I went for a walk with the dog and almost immediately he began pulling, straining at the leash. There, as if it were waiting for me, was a coyote. He just sat there in the dark, staring at me.

JS: “Don’t back out now.” I imagined it saying.

HM: Seriously. THE ANIMALS KNOW. Now you really have to. Or else.

JS: Yeah, they might ambush me otherwise. Okay, I’ve got to get to sleep so I can get up and write (eeeeeeeesh). Let’s check in soon. Wish me luck. 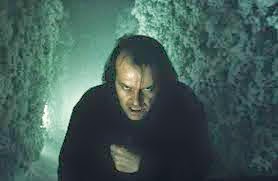 One response to “Zac Efron Hijacks My Week 4 Blog”