The Velocity of Stones

Shall I part my hair behind? Do I dare to eat a peach?
I shall wear white flannel trousers, and walk upon the beach.
I have heard the mermaids singing, each to each.
I do not think that they will sing to me.
—T.S. Eliot, The Love Song of J. Alfred Prufrock 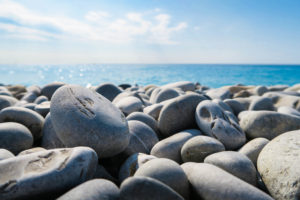 Sometime over the last week there has been a rustling of dark wings inside your chest, a presentiment,  and you suddenly realize why: it will soon be your book’s first birthday.
You published a novel last summer. It’s your first. It’s almost been one year since that launch party with the beaming faces and stacks of wondrous hardbacks that had your name on it, and the cake decorated with the cover of your book. To commemorate the anniversary of that miraculous day you think you should write down some words to send out into the world. Something about the journey, the gratitude; some shiny Facebook post to accompany a photo of you with a proud but modest look on your face, holding the book aloft, perhaps a 1-shaped candle and a party hat.

The only thing is, you don’t know if you should be celebrating, or mourning.

It is not your book you are mourning, you will be forever grateful for the providence that led to its existence. It is your expectations that have taken on a mortal wound. You wanted a bestseller; your debut book has sold modestly. “I’ve seen worse,” says your agent, but somehow that doesn’t fill you with relief. “I’ve seen worse” was your experience in elementary school gym class, where you would finally  get picked for a kickball team, ahead only of Joey Prentice, who had the posture and stance of an abandoned cat, and Rick Blom, who was a flat-out spazz. It’s never good to conflate your book sales with fifth-grade P.E. Your novel dove into the literary world cleanly and without much of a splash— if it were an Olympic diver, it would have medalled.

It was something you’ve known for a while. That initial surge of sales and internet chatter in the first weeks after the book launched was exciting and hopeful, a bright warm coral reef of interviews and book signings and readings and Amazon rankings and then suddenly you were at the ocean drop off and it got really quiet really quickly.

Your first tug of worry was when your local paper elected not to review the book. And then there were no reviews forthcoming from any major outlet. Too many books, not enough print space. How were people going to find yours? You popped open your laptop late at night, over the protests of your husband, shuttling anxiously between your Goodreads and Amazon author pages, hoping for a sign of a surge, some critical mass of chatter that might yet launch your baby into orbit, but… no.

All was quiet on the Western Front. And out of that formidable silence you fashioned one smooth stone, and then another, that slipped, unnoticed, into your pocket.

Of course, you still love your book, still think it’s a thing of beauty, not just the writing but its very creation: all those people who believed in the project— those who edited it and illustrated it and designed the cover and laid it out and marketed it and marked the galleys up with squiggles meaning they too had read deeply and had invested in it. Invested, that’s a word to avoid, because you think of the people who had backed you and wished you could have done better for them. They were your team and you didn’t want to let them down (Why all the athletic metaphors? Why is writing a book like playing a sport? Didn’t you start writing precisely because you were no good at sports?). And that sense of responsibility is another stone in your pocket, reorientating your center of gravity a little closer to earth.

Armed with these justifications you’ve carried on through the year, keeping your attitude optimistic, doggedly working on another novel, retaining all the exclamation points on your Facebook author posts. But this bucking up has created another stone, the largest one, heavy but hidden even from you. It’s the thought you haven’t allowed yourself to admit, not in your thoughts and certainly not aloud: I really wanted the book to sell. I did. I wanted it to find its readers out there in the world. And it hasn’t.

It’s almost a relief, to say this, to write it down. It doesn’t mean you want sympathy, or that you don’t think the book was worthy, or that it would never catch on. It only means that it will have the life that it has, and you can move on.

And now this milestone approaches. Millstone? You turn out your pockets and discover all these heavy things you’ve been carrying around. Huh. There they are. And you realize that maybe it’s the weight of them that you’ve been feeling this past year. Maybe they’re like kidney stones and it’s taken you this entire time to pass them. Are there more? Probably.

However, you’ve recently begun working on a writing project that has nothing to do with career or status, but is purely for love of the Art, something you haven’t done in a long time. It makes you feel lighter. It reminds you why you should be writing, why you wrote your novel in the first place. Because you love it.

Examine the stones you’ve taken out. Feel their weight in your hands. What should you do with them? Toss them over your shoulder? Slip a couple back in your pocket? Display them on your bookshelf, next to the beautiful beautiful copies of your book?

Or maybe you walk upon the beach with them. Skip them out into the water. See how far they’ll go.

One response to “The Velocity of Stones”