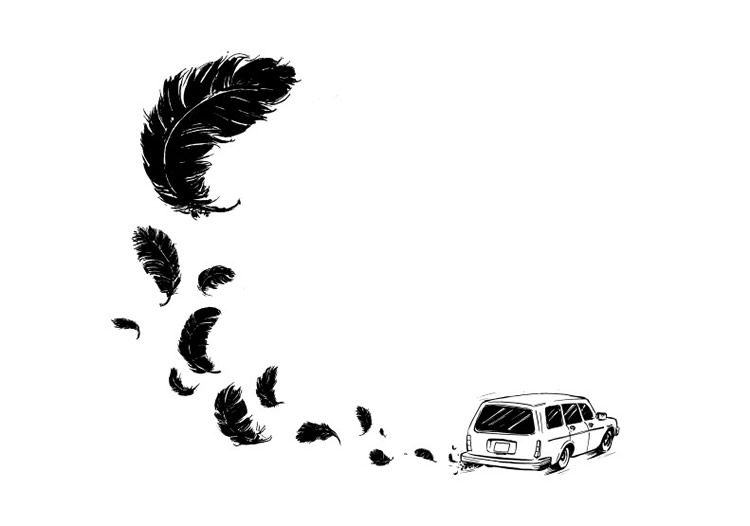 She drove the blue Volvo station wagon away from Vee’s house with a sober determination, like it was a lame horse she was leading out of the barn. She was going to drive both the car and herself over the nearest cliff, or, rather, it being Wisconsin, the nearest steep embankment. But sailing south along I-94, in the early morning before rush hour, she found she couldn’t let go of the Volvo and she couldn’t let go of the road, and the highway racing before her seemed to offer a faster route to oblivion than sailing off into some moderately inclined culvert. All might still be lost, in time. There were other opportunities up ahead to smash into and through some guardrail on her journey. Colorado, now there were some cliffs worth driving over.

But she needed speed, more speed, and the ballast in the car was too heavy to let her fly down the highway, no matter what the speedometer was registering. So she twisted her upper body like a contortionist and managed to snake her right arm around and under the baby car seat behind her in order to unshackle it from the upholstery, and with a desperate, sudden yank which would cause her a good deal of shoulder pain later that night, she managed to hoist the seat over the gear shift and partly into her lap. Moments later it was pushed clumsily (understandable at ninety-five miles an hour) out the passenger-side window. It bounced twice along the highway like a skipping stone before skidding to rest on the side of the road.

(The two abandoned car seats were accounted for later that day; the second one landed in the middle of a lane, causing the rush-hour traffic delay that Owen heard on the clock radio as he was trying to will himself awake; the other was discovered and identified by Vee in her car, just outside Racine. Neither was saved.)

And for a time after, Emily did feel lighter, her mind clear, even excited, and her breathing deepened for the first time in almost five weeks. This continued until just past Madison. Approaching the slowdown that was inbound Chicago traffic, she began noticing through her rearview mirror the imprints of the car seats in the upholstery. Also, a small teething ring, a scattering of Cheerios, and a grimy diaper rag.

The backseat, the entire backseat, was gone by the time she hit Iowa.

She drove the blue Volvo station wagon away from Vee’s house with a sober determination, like it was a lame horse she was leading out of the barn.
read more ...