Approaching my half-century mark (am I admitting to that? I guess I am) in a couple of  days, I, like so many before me, preoccupy myself by looking backwards as I hurtle forwards. I’m especially fascinated by those remote college years (can “Rock Lobster” be really that old?). It’s not that I regard those days with any particularly burnished glow, nor do I have any remote desire to revisit that time. But still, I look back.

The following is an excerpt from a project I’ve been working on called “Midterms.” I conducted a series of interviews with  a group of college friends who ran together as a sort of tribe Freshman year. I interwove those interviews together to explore who were were then and how we relate to each other now. It was quite revealing, and more than a little nostalgic. I had hoped to get it formatted and sent off to my cohorts before my birthday, but, alas, life intruded. So, until I can get it completed (soon! soon!) I offer the introduction:

In the fall of 1980, just shy of
my eighteenth birthday, I arrived on the blustery shores of Evanston, Illinois,
leaving behind my moped, my job at Daisy’s Chinese Kitchen, my Dungeons &
Dragons friends and my New Jersey family to embark on a new life as a freshman
at Northwestern University. I had little idea of what I would find there, and
no real expectations; all I knew was that it was “away,” and that was
a good thing. In truth, I felt half-formed, opaque. Searching, but not knowing
what for. I was passionately Christian (thought not in an institutional way— I
preferred to communicate directly with God); ostensibly straight; devout to
sci-fi and fantasy; and in love with wandering Times Square (in its previous
seedier incarnation), letting its streetlights guide me where they would. I had
secrets, but they were hidden, even from me. 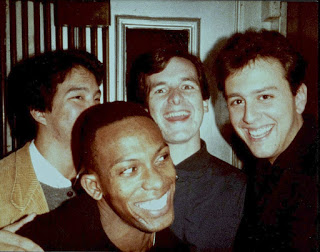 What I got from my four years of Northwestern,
more than a desultory education and the degree, was an identity. I fell in with
a group of diverse, gay, and, I must say, fascinating people who were unlike
anyone I had ever known. Denis O’Hare. Frank DeCaro. Harry Althaus. Timothy
Engle. Darren Perkins. This cluster of friends formed the nucleus of what was known
variously as “The Army,” “The Group” or “That Loud Group
Over There.” Through them, little by little, the shell that was me was filled. They
shepherded my coming out with wit and understanding, and under their tutelage I
learned much— about music, about film, about the Art of Being Gay. So many discoveries: with Denis I
made the switch from Jesus to Sartre, finding that existentialism suited me
much better. Frank informed my music library, and showed me the joys of dancing
alone in one’s room. Harry, well Harry introduced me to so many things: my first
gay bar, my first sushi… Tim taught me about the power of tenacity and the
genius that was Sondheim. Darren was the only one I could not even approach; he
flitted in like a rarified species, dazzling and inexplicable, and flitted out
almost as quickly. But really, all of them had that effect on me. I would
mostly sit and listen, not daring to compete; I always remember feeling like Armistead
Maupin’s Mary Ann in a room of Anna Madrigals. 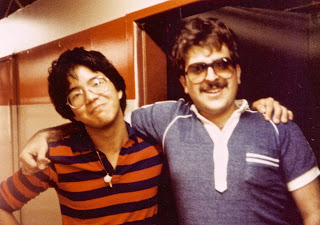 Since graduating, we have of course all moved away and moved on.
We’ve weaved in and out of each others’ lives, lost touch, and found each other
again. The connection, though, is always there. Recently, rooting through the
jumbled and faded photos from that time in college, I reencountered many other
friends, important to me at the time, who are long lost now. So many people
drift out of our lives, or are jettisoned. So why have these particular friends
remained? I have a theory, of course, personal to me: I think that during these
college years I was shaped into who I am today, and that these friends, so
vital in that shaping, has left bits of their DNA ingrained in me forever. They
can never be strange, or truly absent; they are, in the best sense of the word,
Family.

And
now, with my encroaching birthday in December, we will all have crossed that half-century mark. Better
yet, we are all here, and all healthy,
which is nothing to sneeze at. There’s not a lot I remember about college (my
memories seem to be archived on a disk with an antiquated format) so I wanted
to gather recollections and stories of that time before they were lost for
good, and to commemorate this half-century mark. Through individual Skype chats
I’ve found that I’m not alone in my faulty recall, but when pieced together a
pretty energetic narrative emerges… 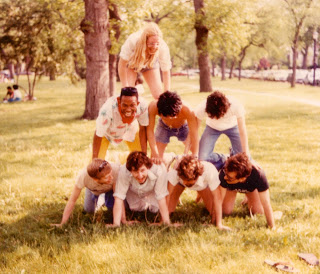 Happy Birthday to all of us! Have a wonderful, and safe, end of the year!

One response to “Midterms”